She spent months as a captive…until they set her free.

Get a FREE Masters’ Admiralty collectors edition poster when you order a signed copy of Desire’s Addiction. 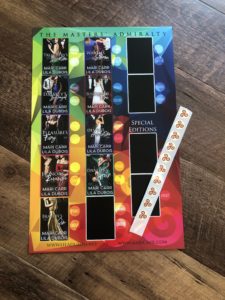 Biochemist Talya knew what she’d discovered was too dangerous to reveal. After two months as a captive of the mob, she’s broken…until she’s rescued by two devastatingly sexy men.

Relentless billionaire Henri Fortin gives Talya a safe place to recover…after purchasing her at a forbidden auction. It wasn’t the most traditional rescue, but now that she’s in his home, Henri will do anything to protect her.

Milo wasn’t able to save Talya before. He’s haunted by the fact that he had to walk away and leave her captive. Now that she’s secure he should leave…but he doesn’t want to. Because he’s drawn to Talya and Henri.

However, the past and the promises they made to Europe’s most powerful secret society aren’t the only things standing in their way. They’re all keeping secrets…and the Camorra isn’t finished with Talya.

There are no reviews yet.

Only logged in customers who have purchased this product may leave a review.

Ebook purchased directly from Lila’s Not So Secret Store will work on all devices and apps.

A few minutes after checkout you will receive an email from “BookFunnel” with the title and download information.

Never Miss Out On Your Next Sexy Read